Ardingly Ifield Solar have been designing, building, and racing solar powered cars for over a decade. This is a working partnership between an independent and a state school, allowing us to teach our pupils more effectively about sustainable transport.

This September the solar team entered the Basking Beastie (the only UK road-legal solar car) into the Ilumen European Solar Challenge. This highly prestigious event is a 24hr endurance race run around the famous Belgium Zolder circuit.  Ardingly Ifield Solar is the only school-based team to ever have entered this event. The 50 strong team consisted of 22 pupils from Ardingly, 10 pupils from Ifield Community College and a back up team made of teachers and old Ardinian volunteers.

The team camped in wet and windy conditions, having to dig tre 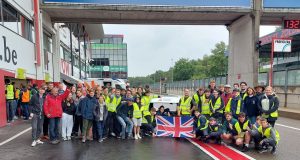 nches around their tents for ‘puddle management’.  Additionally camping next to the Polish team was not conducive to sleeping as the Poles seemed to be on a different timescale. However, despite being wet and sleepless, the team spirit was amazing, as was the food.

In the challenge the first part of the process is scrutineering where the vehicle goes through a series of both static, dynamic, and night testing.  One of the key tests is to evacuate the car within 15 seconds. Whether it is due to fear or agility we do seem to be very good at this.

The race started at 1.00pm and initially the car performed extremely well until one of the two hub motors shorted at about 5 hours into the race.  We did manage to limp on and finish the race on one motor, which was solely due to the prowess of the student pit team.

What though was so impressive about this trip was seeing two schools work together and letting them learn from other university teams. The organisers praised our pupils for their conduct, professionalism, and their work ethic.