Year 4 Viking Experience: from life at home to battles, the Gods and how to have fun, Viking-style 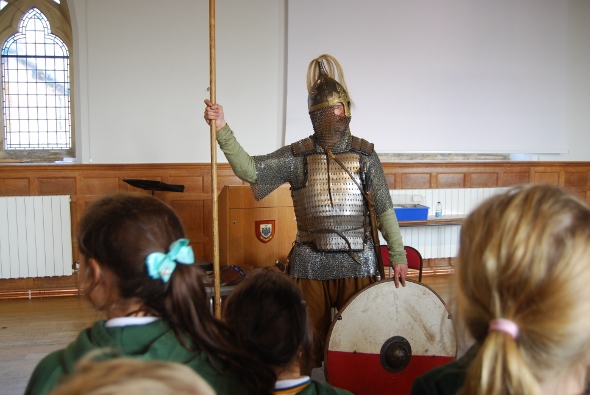 The Viking warriors who visited Ardingly College have been successfully raiding schools for nearly twenty years and, in much the same way that the original Vikings left an enduring mark on Britain, they left a lasting impression on pupils and teachers alike.

As part of the Year 4 children’s Marvellous Middle they have enjoyed a wonderful day of learning all about the Vikings. The day started with a short talk, followed by a number of activities for the children to take part in, such as playing Fox and Geese (the Viking board game) a Viking quiz, fire lighting and life at home, with a chance to examine a range of artefacts from cooking pots and utensils to an ironing board and combs (the girls soon learn what was expected of them 1200 years ago!)  After a short break they witnessed a weapons and armour display, Viking spear wrestling and a Viking battle.  The climax of the day was a  drama re-enactment of Ragnarök.  In Norse mythology, Ragnarök is a series of future events, including a great battle, foretold to ultimately result in the death of a number of major figures (including the gods Odin, Thor, Týr, Freyr, Heimdallr, and Loki), the occurrence of various natural disasters, and the subsequent submersion of the world in water.  Basically, the end of the world!

“I really liked the board games we played this morning.  It was great fun because it was quite complicated and we had to work out how to play the game with medieval counters.”

“I loved feeling the artefacts and playing the game Fox and Geese. You had to surround the geese to capture it and it was different to anything I’ve played before.”

Leading the Viking Experience with the children, Mike Everest said:

“Those who fail to learn from the mistakes of their predecessors are destined to repeat them. History is the meaning behind all.  By learning about history, we learn from our mistakes, why the world is as it is and where everything comes from.  Children are amazed to find out that the world they live in today is safer than it has ever been and they have the chance to live longer than any of their ancestors.  These children’s lives were shaped by people in this country thousands of years ago and it is a wonder for children to behold when they learn about that.”

The Viking workshop leaders have appeared in many historical documentaries and feature films, as well as the BBC’s “Horrible Histories”.