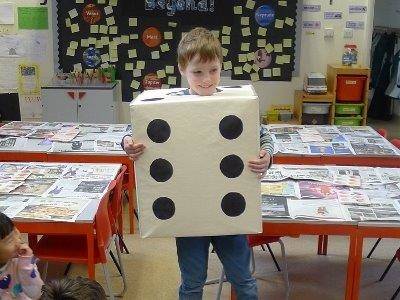 The children arrived at school dressed in numbers and patterns, spots and stripes and there was even a 1 to 6 die! They really enjoyed performing in their very own catwalk show accompanied to Madonna’s ‘Vogue’ – thankfully no one tripped over their cloak! The children all looked fabulous in their mathematical clothing. Mr Everett, Miss Hood and Mrs Bradshaw also accessorised with Numicon plates and threading numbers… What a stylish number crew!

The children spent the day involved in a variety of mathematical challenges.  Each child made a 100 day hat with 100 fingerprints on, counted out their 100 things brought in from home and made very glamorous 100 day glasses. The children also drew 100 smiles, followed the numbers from 1-100 and wrote down the missing numbers on our daily one hundred square, played ‘SPLAT!’ on the computer and made lines of 100 cubes with the Unifx.

The highlight for each class was following the special trail of footprint numbers which led them out of Year 1, right through the Atrium and Library, over the playground climbing frame, past the Nursery, through Mrs Young’s office and as far as the dog kennels!  They made estimates on the way, guessing what number would be at the bottom of the stairs or around the corner until they discovered the treasure chest.  Once there, they had to decipher a number clue and put the number into the lock to reveal the treasure taking care to not disturb the genie.

What a lot of marvellous mathematical fun had by all!

Here are some quotes from the children:

“I liked bringing in my 100 things from home.” Thomas Gatley

“My favourite thing was making the glasses. Mine were yellow with decorations on them.” Eva Luongo

“We made one hundred fingerprint hats – that was the best!” Lexie Bradshaw

“We found footprints that led to treasure! We had to solve number clues to open the genie’s treasure chest.” Rafferty Blockley