Despite the obvious limitations and restrictions, this third lockdown has created, the music has continued to ‘play’ at Ardingly College this half term. In both the Prep and Senior schools, ensembles have continued to run with the usual verve and vigour and we will be able to show you the fruits of those labours in our termly concert in March. 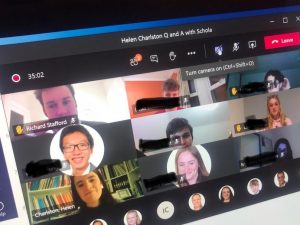 Alongside this, our bubble choirs in the Senior School are working hard whilst Schola Cantorum have continued their busy schedule of three rehearsals a week, showing incredible commitment and discipline in these trying times as we work towards the postponed 150th College celebration CD and the annual Cabaret night.

We were able to welcome the up and coming Mezzo-soprano, Helen Charleston to the college virtually, delivering a Q and A on her career, some vocal tips and crucially, how to be a musician and singer during the lockdown. 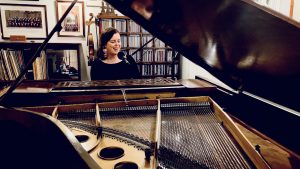 inspirational Joanna L’Estrange joined us for a virtual rehearsal of her work, ‘21st Century Woman’ whilst the South American rhythms of Classico Latino have been rehearsed weekly as part of our Classico Latino String project which will air later in the term. However, the goal of submitting performances for virtual concerts has continued this half term and we have enjoyed multiple evenings’ entertainment provided by our musicians from Year 3 to the U6.

First, it was the turn of Year 7 and 8 who produced a lovely concert on 21st January with a mixed array of instruments including guitar, trumpet, clarinet, voice and violin.

Year 5 and 6 followed the next week with a bumper 40 minute concert that had everything from Mustang Sally to virtuoso violin playing.

Finally, it was the turn of our budding musicians in Year 3 and 4 to showcase their musical talents.

The Senior school music award holders have been busy during the first half of term as we aired two concerts showcasing their musical talents, revealing the huge breath in their musical interests as the traditional performances of Chopin Piano music was also juxtaposed with jazz on the oboe and wonderful performances from tuned percussion students.

All of these concerts can be viewed at the Ardingly College Music Youtube Channel and do feel free to tune in to see both past and future performances on this platform.