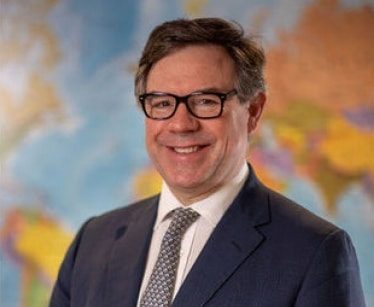 Jeremy Quin MP for Horsham came in and spoke with the A-Level Politics students of Ardingly College. Jeremy Quin began by talking about the number of interesting roles he has undertaken during his political career, including his role as a senior civil servant, his work as MP in the MoD, and his current role troubleshooting a range of problems as Paymaster General. A particular highlight was his reflection on being involved with emergency COBRA matters, for example critical defence decision regarding the invasion of Ukraine; only to then be dealing with constituents’ concerns about their drains at another moment and how he balances the juxtaposition of these different aspects of his role.

Mr Quin gave the majority of his time over to questions from the floor and the students took the opportunity to ask a range of challenging and insightful questions, often linking directly into their study of Politics, but also addressing personal concerns and interests. As a group we discussed climate change, internal party politics, House of Lords reform, Brexit and ‘devolution’. It is great to see students able to discuss and interact with politics in a direct way and with such an engaging and open speaker.