Congratulations to Isabelle Worssam who won the Royal College of Science Union’s science communication competition, where entrants were required to demonstrate their skills in scientific debate and reasoning. All winners have been invited to visit Lord Robert Winston at the House of Lords to witness first-hand the workings of the Upper Chamber. 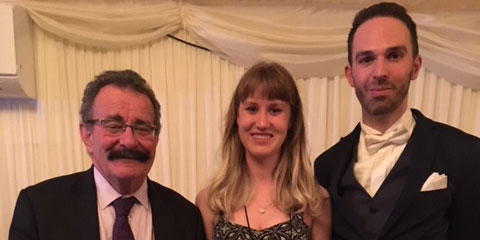 “The competition involved choosing one of five questions which were to be answered in different ways: by writing an essay, a creative writing piece, a feature article or creating a video. I chose to respond to the video question which was: ‘What small area of current research do you think has the potential to revolutionise our lives and why?’ For each question there was a School’s winner and a University winner.

Rather helpfully, the week before I had produced another video at school, when I entered the drama Challenge Week.  I created a stop motion animation about Shakespeare, which taught me a lot about different video techniques that could be employed.

It took me a long time to think of an area of research I might wish to explore. I study Physics so I started by looking at research topics in this area. I thought about re-useable rockets and quantum computers, however these are such large areas of research that I found myself struggling to accurately answer the question. It seemed to me that Biology was the science that had the most immediate impact on our everyday lives but I don’t study Biology!

Then I had the idea of doing it on my own condition: Type 1 Diabetes, which gave me the ability to produce a very personal video. This was something Dr Martin Archer (who was judging my category) commented upon; that he liked my video because of my personal expression of the science. He also liked my different techniques to create my video: time – lapse animation, cartoons, speaking directly to camera and physical demonstrations of the science (throwing balls of paper at my sister, which was fun to film and made people at the final laugh!). I really enjoyed the experience of creating the video and this has made me consider a career as a science presenter. That way I could combine two of my interests; performance and science.

The final at the House of Lords was an incredible experience. Within minutes of arriving I found myself chatting to Lord Robert Winston and then we were sitting at the same table! I also chatted to lots of Imperial University students, which was great insight into the courses they offer there. The students were very easy to talk to, which made me realise that the transition to University hopefully won’t be so hard.

The evening was amazing – and would have been just as amazing if I’d won or not – though becoming the Royal College of Science Union School’s Winner for my question was a great ending. The University Winner for my question, Patrick, was sitting next to me and I recognised him immediately as I’d seen his video on Quantum Teleportation. We had an interesting discussion on the real world benefits of Human Teleportation and decided it will definitely not happen in our lifetimes!

Lord Robert Winston has invited all the winners to tea at the House of Lords when he will give us an insight into the daily workings of the Upper Chamber. I was thrilled to win this prize and to have been part of this amazing experience.​”