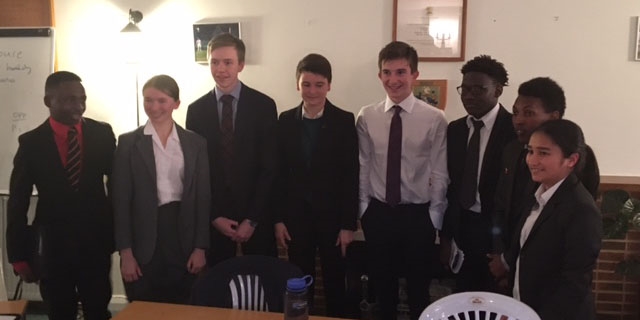 Ardingly College enjoyed a lively evening of debating with the Pestalozzi school on April 27th. Pestalozzi is an educational charity which provides 100% scholarships for students from Zambia, Zimbabwe, India, Nepal, Bhutan and other countries with a focus on developing Head, Heart and Hands.

Ardingly students proposed the motion This house believes that Artificial Intelligence is something to be feared, with concerns that AI will develop to such an extent that machines will programme themselves, and at a faster rate than humans will be able to understand or control.

The Pestalozzi students argued against the motion, making the point that all developments in technology could be feared but that this shouldn’t stop progress which could make significant differences to world issues such as poverty and starvation. The audience agreed more with the Pestalozzi students both before and after the debate.  The  teams performed very well indeed and Luca Demetriadi chaired the debate expertly. The atmosphere was intellectually muscular but also friendly and both teams enjoyed meeting each other and socialising over dinner.