Ghana was the destination of one of the Lower VI service trips over the Summer Holiday. Students learnt about the history and culture of the country, experienced fantastic scenery and wildlife but most importantly gave their time. They taught English, helped build desks financed by our fundraising efforts, and provided assistance in the local hospital. On the 2nd July, slightly tired after a long journey, we arrived in Ghana and spent our first night in a lively establishment right beside the sea.

The next morning we took a three and a half hour ride in a tro tro from our hotel to Cape Coast castle, the primary British slave trading post in West Africa, which gave us some history and perspective, especially as we were shown the cramped, unhygienic conditions that the slaves were exposed to at that time. We were then taken to our next hotel, Hans Cottage Botel, and went straight to bed because of the early morning to come.

Waking up at 4.30 a.m. was not the present that Matthew Hay was expecting on his 17th birthday, but he admits that it was worth it, as we travelled to Kakum National Park to view the sunrise from the rainforest’s treetop canopy. Although we missed the sunrise, the rainforest was beautiful from that height. Walking through the rainforest, we encountered various forms of wildlife, and plants said to have healing properties. On the way back, we visited a monkey sanctuary in which Mr Lovat’s old pet monkey lives. It is good to see that these animals have a safe place to live. That afternoon, all but three of us set off to visit Elmina, a historic town near Cape Coast with a castle of its own. 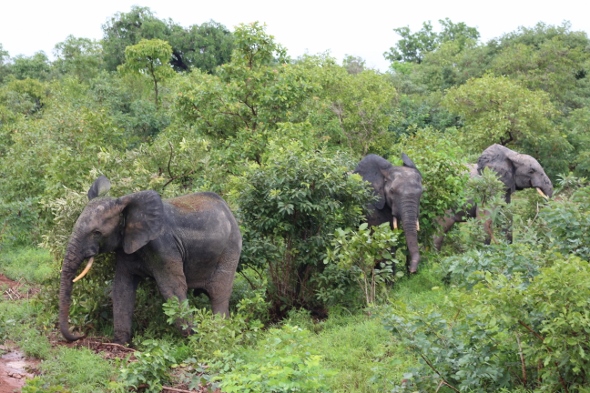 Another day of travelling followed as we drove to Accra and caught a flight to Tamale, a city in northern Ghana. From there we took a bus to Mole National Park, where we spent the night.

The day started with a morning safari, where we saw mostly antelopes, but we did get very close to some elephants, which was an amazing experience. In the day, we visited a traditional village nearby, where some of us bought their hand made shea butter. We then took a canoe down the river, but we were unlucky and did not see much wildlife at all. This was the opposite in the following night time safari, where we saw all sorts of animals, from elephants to crocodiles to a black cobra, although sadly we did not manage to find a leopard. This brought to an end our whistle stop tour of Ghana, and now was time to do some work.

The following morning we travelled from Mole to Bolgatanga. After dropping our bags off in the Black Star Hotel, we travelled to the school where most of us would be working to see what we had signed up to. With 3 buildings made of stone, we were told that this school was reasonably well off in comparison to some of the other schools in Ghana. However the lack of desks in the primary classrooms was noticeable, so some of the students decided to help a carpenter to build desks, as some of the money raised for the trip had been spent on buying the wood. Others decided that they would help by teaching in the school, from English to card games. Two of the students decided to go and work at the local hospital to learn and to aid the community. There was even some hockey coaching from the students to the national youth hockey team.

Having sorted out what we were going to do on the Saturday, we went back to the hotel to rest. On Sunday we visited the sacred crocodiles of Paga at very close quarters, then went to visit an old slave camp brimming with history. 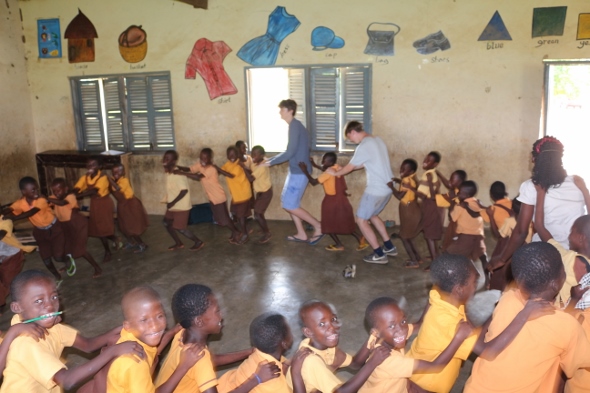 On Monday, work started. Everyone worked tirelessly until Thursday. By then, the desks were finished and a ceremony to thank us was held. We were rewarded with some hats, and a dancing circle began, where more than one dab was seen. That night we said our goodbyes, and, after visiting a market and museum, we caught a 17 hour overnight coach back to Accra.

After sleeping in our hotel for most of the morning in Accra, we travelled to the airport and embarked on our long journey home, arriving in the early afternoon of the next day to the open arms of our parents. Overall, the trip was an eye opening experience for all of us, as we experienced conditions and saw things that we had never before. Teaching the children and making desks was very rewarding for me personally. Apart from a room invasion by baboons for three of the boys, it all went swimmingly! It is an enjoyable and rewarding trip for anyone looking to go in the future.