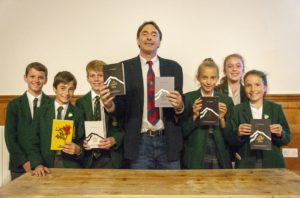 Matt Dickinson, adventurer, award winning film-maker and writer visited Ardingly College pupils to discuss his experiences and the books he has written.

Matt Dickinson is probably best known for his documentaries as he specialises in the wild places and people of the world.  In May 1996 he made a successful ascent of the North Face of Mount Everest in some of the worst weather conditions on record. Beating hurricane force winds and temperatures of minus 70 degrees below freezing, he became one of only five British climbers to do so. He also became the first British film-maker to return alive having filmed on the Summit.

Matt first went to Everest in 1996 when he was filming Brian Blessed on his attempt to scale the summit for the BBC. Brian Blessed had to retire but Matt carried on with some of the other climbers on the team, including Alan Hinkes – the first and possibly only British mountaineer to have summited all 14 Himalayan summits above 8000 metres.

A couple of years ago, Matt was also the first “Everest Basecamp Writer in Residence” and he accompanied various teams up to high camps on the mountain.

Matt started his day at Ardingly talking to all the Shell and Remove pupils in the Under. He then hosted two writing workshops before giving a presentation to the Year 7 & 8 children.  They were certainly very engaged with what Matt had to say:

“I loved hearing about how his colleague got hypoxia and he could hear the air bubbling in his lungs when he was breathing beside him in his tent.”

“I thought it was really cool learning about how if you threw water or tea in the air it would turn to ice before it hit the ground.”

“It was amazing to hear that he’s gone up Everest more than once and has survived every time.”

“I was amazed to learn how long it takes to get to the point at which you then start climbing Everest. And learning about all the things you should and shouldn’t do, such as take some types of chocolate – Toffee Crisps will explode because of the air pressure.”

“ He told great stories!  Two of his fingers still have no feeling in them as they got frostbite.  He explained that you could jump on them and he wouldn’t feel anything.”