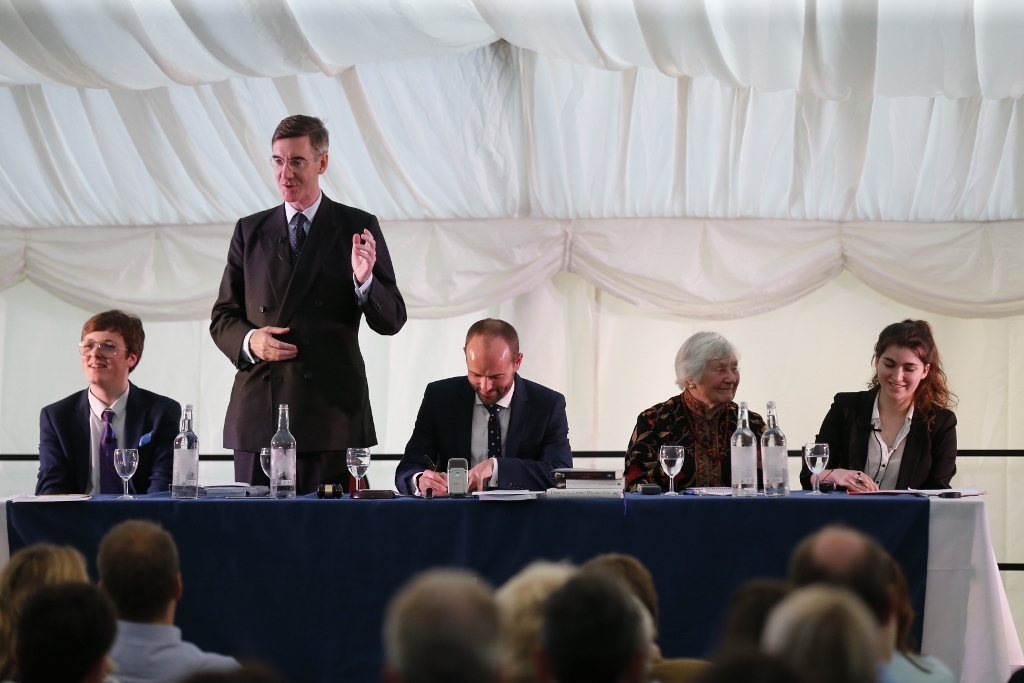 Ardingly College was the setting for a major debate on the issues facing voters in the EU referendum. Over 400  hundred students, staff, parents and local residents took part in a lively, informative and illuminating debate about the ins and outs of whether the UK should leave or remain in the European Union.

Dame Shirley Williams campaigned to Remain, while the Rt Hon. Jacob Rees-Mogg led the charge for the Leave camp.  The  debate was opened by Fifth Former Charles Amos, who as a member of UKIP passionately railed against EU tariffs, and  Sixth Former Anna Elwin who spoke eloquently of the advantages of a united post-war Europe and the importance of 'remaining in the room'. 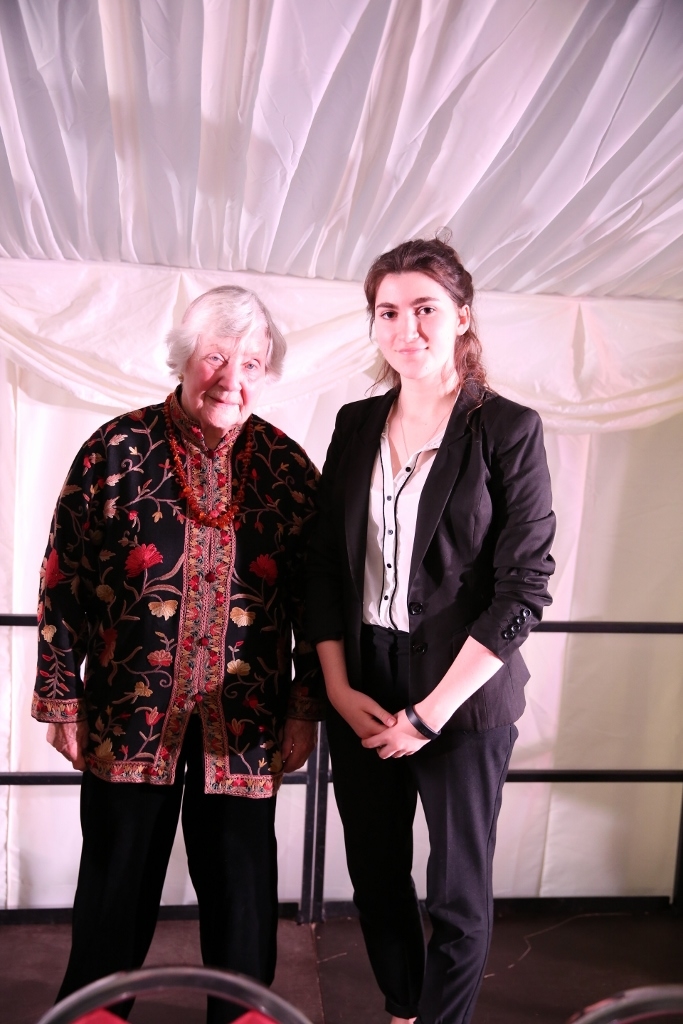 Both guest speakers praised the students' depth of research and enthusiasm in  their 'fabulous speeches', and themselves went on to share their opposing  views in a mutually respectful and dignified way.  JRM advocated the benefits of Brexit not only to the UK but to the developing world,  calling it a moral responsibility to aid these countries rather than wealthy European neighbours. Dame Shirley, however, stressed the role the EU has played in creating and upholding  peace and democracy in Europe and the importance of staying united with our neighbours  for the good of  future generations. 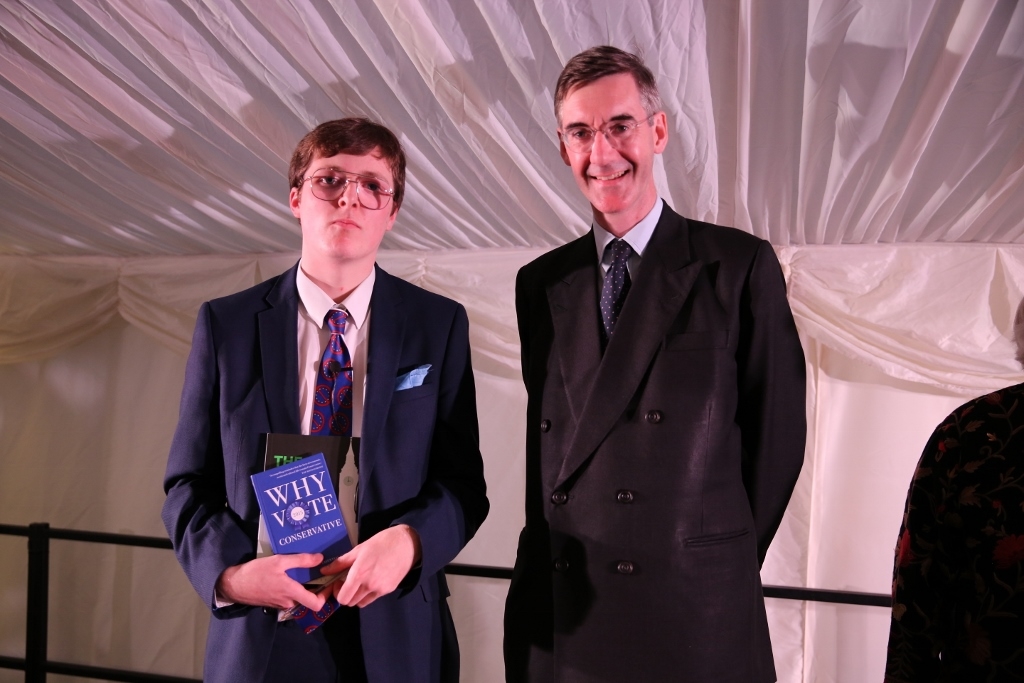 Audience members contributed and questioned keenly  and many commented afterwards  on the high quality of the debate  and lack of political point-scoring in what was a most inspirational evening.

Old Ardinian Robert Watts, a Sunday Times journalist and former Westminster Correspondent, was in the audience and we asked him to write up a report of the night's proceedings:

One dearly cherished, recently-retired Westminster stalwart now in her mid 80s, who served as a Labour Cabinet Minister before striking free as one of the “Gang of Four” to form the party that would become the Liberal Democrats.

The other a 16-year-old Ardingly fifth-former who has already stepped onto the political battlefield as the media secretary of the UK Independence Party’s Mid Sussex branch.

Baroness Williams and Amos were two of four speakers in the EU debate the College staged on the evening of 21 June, 36 hours before polling was due to begin in the long-awaited referendum.

Amos had secured quite an ally in Jacob Rees-Mogg, the Conservative MP and BBC Newsnight regular. The North Somerset MP is famed for his plummy tones, canvassing his Somerset constituency with his aged nanny and – more importantly – as one of the most erudite voices of the Brexit campaign.

The honour of taking the same side as Baroness Williams fell to sixth-former Anna Elwin, who had finished her A-levels just a few days before.

Such a cast proved quite a draw. Holding the event in The Under, which accommodates around 200 people, had been the initial plan. But when the tickets were snapped up in a little over a day, the venue was switched to a marquee on the Terrace – allowing at least 400 students, parents and OAs to attend.

Amos spoke first, opening up by thanking the two guest speakers. Rees-Mogg was an inspiring figure, he said passionately. Confronted with his ideological opposite, Amos said – with a straight face and no hint of a blush – that Baroness Williams is a “wonderful politician”.

Pleasantries done, business began. Amos unleashed salvo after salvo of statistics as he argued that the EU was a “morally bankrupt” institution that “keeps Africa poor” by imposing tariffs on their agricultural products.

Britain must once again be a land of free trade, he said. But would Britain get a free trade deal if it left the EU? “It is blatantly obviously we shall,” he said vigorously, citing the £89bn trade deficit that Britain has with Europe as the motive for such a deal.

But we should not be focusing on our trading relationship with the “crumbling” European economies, Amos insisted. "Developing stronger ties with the thriving economies of the US, China and India is where our future lies."

If Amos battered the audience with economics, logic and statistics, Elwin deployed a very different tactic.

She was there to win hearts as well as minds. So, she said it was “heart-breaking” that we are considering “walking away” from a union vital to combat climate change, slavery and torture. This was an “historic union” that has ensured that the “miracle of peace in our time is now mundane”.

A well-crafted, resonant sentence can change more minds than the most striking of statistics. Some of Elwin’s best included: “By pooling sovereignty we amplify our influence”; “You don’t take control by running away from the situation” and “Why cut ourselves out of the conversation?”.

But Elwin also displayed an impressive ruthlessness towards the Brexit campaigners. “Fear-mongering bigots” have turned this national debate into a conversation about immigration, she said. The Leave campaigners’ £350m a week figure for the EU’s cost was “completely irresponsible”. Michael Gove’s attempts to portray himself as an NHS champion certainly did not escape her ire.

It was an impassioned display, one Rees-Mogg said put the Remain case as well as any he had heard during the many referendum debates in which he has featured. “But Anna hasn’t quite managed to change my mind,” he admitted.

The MP spent a minute winning the audience’s favour, surprising many by disclosing that Baroness Williams is in fact his brother’s godmother and had helped his father land his first job.

Rees-Mogg’s argument homed in on portraying the EU as an undemocratic, unaccountable and failing “state”, harming those inside and outside the union.

He cited EU opposition to moves by the “democratically elected” House of Commons to improve rural broadband and cut tax on women’s sanitary products. "The Common Agricultural Policy has driven up food prices and stifled innovation in farming", he said. "The Common Fisheries Policy has smashed a once great British industry… The euro has throttled the economies of southern Europe, driving more migration to the UK." But he artfully drew a distinction from the noisier critics of immigration, highlighting how EU rules oblige the UK to take 50% of its migrants from 8% of the world’s population. He repeatedly attacked the “unfairness” of a system which discriminates against legitimate migrants from outside the EU, citing two moving cases from his own constituency.

The MP concluded by saying that voters would on Thursday have a “clear vision” on what they perceive their country to be. He urged the audience to ask themselves whether their “country is the European Union or the United Kingdom”.

Baroness Williams responded, robustly denying that the EU was a failing state and vigorously setting about Rees-Mogg’s other argument with debating skills honed during more than half a century in Westminster.

Portraying the EU as undemocratic was also unfair when many of Britain’s MEPs are UKIP members that fail to attend debates or vote in the European Parliament. Our parliamentary system is hardly the paradigm of democratic representation, she added.

The peer warned that Brexit could inadvertently lead to the break-up of the United Kingdom if Scotland wants to remain in the EU. It may undermine the Irish peace process, potentially leading to a new border between north and south. She also criticised the Leave campaign’s dishonest portrayal of Turkey as an imminent EU member.

However, the Baroness was perhaps at her most compelling when highlighting that the EU was an essential agent to help combat the challenges of the future, be they climate change, rising population or shortages of the world’s resources.

“The problems of the future are not the same as the problems past,” the peer said. “It is crucial to keep our voice at the table if we are going to come up with the right answers to some of the these terrifying questions.”

The College’s Head of Business and Economics Daniel Davies then chaired a feisty 45-minute question session, which began with Anna Elwin’s father lambasting Rees-Mogg for the £350m-a-week figure frequently trumpeted by Brexiteers.

Amos and Mogg questioned whether trading partners who want the UK to remain in the EU truly have Britain’s best interests at heart.

But Amos drew fire from Elwin for suggesting that Barack Obama should “go back to America” after the President had suggested Britain would be at “the back of the queue” when it came to negotiating a trade deal with the US.

The sixth former responded that telling the President of the US to “go back to America” smacked of the little Englander “arrogance” that had marked too many of Vote Leave’s campaigners. This line probably stirred the loudest cheer of the evening.

Nevertheless, calling the mood of the audience was not easy. This referendum campaign has divided friends and families as well as communities and political parties. Ardingly College appears to be no exception.

Whatever the outcome of the referendum, in the weeks and months ahead bridges will have to be rebuilt between people that hold opposing visions of Britain’s future.

As if to hint at the reconnection that must come, Anna Elwin read a closing poem called Perhaps, which meditates on separation. On finishing her reading she presented a copy of this poet’s works to her opponent, Mr Rees-Mogg.

And who was the author of these poems?  Feminist and pacifist writer Vera Brittain – Baroness Williams’ mother.