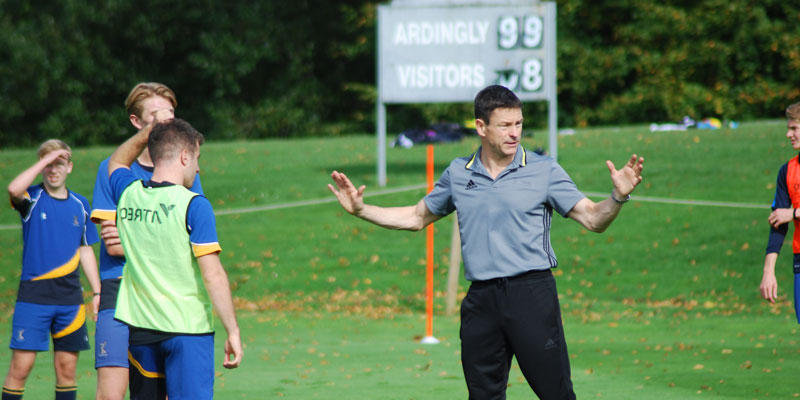 The former coach of Man U U18s trained Ross Millard, Director of Football at the College, when he played for Manchester United.  He invited him to train with the College’s Elite players and to coach them not only in tactics on the field but also what is necessary off the field. During his time with the students, they learnt about ‘team connectivity’ and the importance of mental strength: the difference between winning and losing can often be psychological.

“ Teams work together because of connections.  That is what it is all about.   At Manchester United we run the team like a family because if they are connected, they understand each other and will perform to the best of their ability.

“I trained Ross when he was at Man U so was very pleased to come to Ardingly when he extended the invitation to me.  The School and the facilities are brilliant and the boys have been excellent to train and work with.

“I have been coaching them in a different technical way today, in particular to learn to run behind the defence.  It’s a form of street football really where speed, awareness and agility are key.  This is the same training players such as Marcus Rashford had from me a few years ago and it works.”

“In terms of training, Mr McGuinness taught us all about playing as a unit. He believes the combination of always playing that way will unlock other things.  He was keen to stress the need to move off your man and create space for the game to flow. He then gave us an inspirational talk about creating an elite performer.”

Here are the slides – I don’t know if you can post this as a whole, or whether you like it?  They are made up of single images so you can separate them if you want to just pick one you do like?