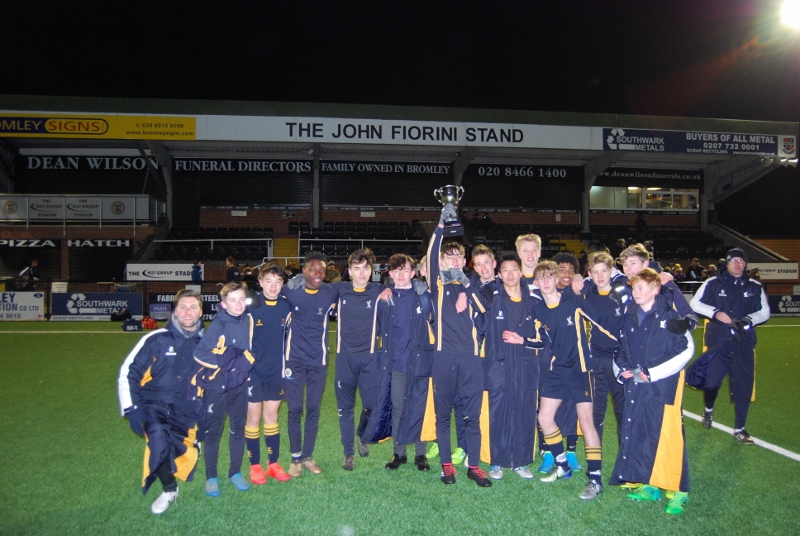 Ardingly College U15’s finished off a fantastic season by winning the Elgin U15 league beating Brentwood 6-3 in the Final at Bromley FC.  After the disappointment of being knocked out of the ISFA National semi-finals the boys were keen to make amends.

Brentwood started the better of the two teams going one nil up early into the game.  A fantastic response from Ardingly saw them go into half time 3-2 up.  In the second half Ardingly dominated the game and ran out worthy winners.  Timi Esan scored a hat trick and also took home the man of the match prize.  A well-deserved result and a fantastic season. 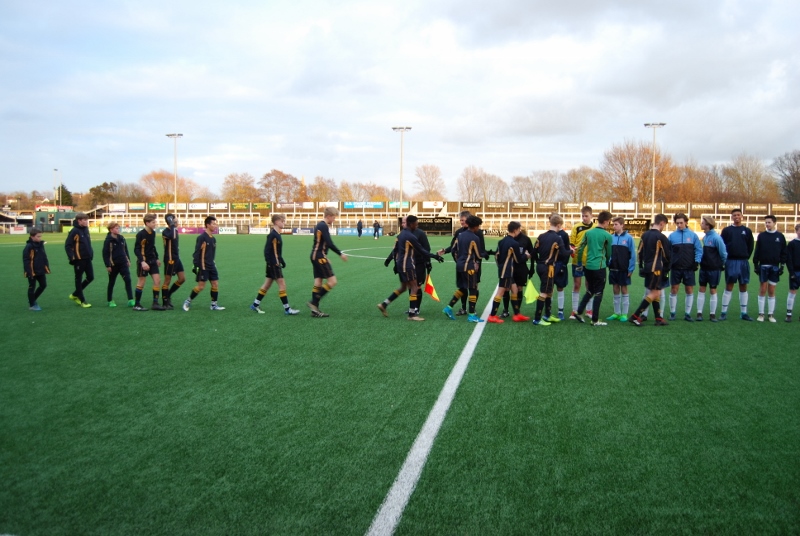 On a clear but very cold evening the intrepid Ardingly U15 squad, plus supporting staff, journeyed through Coulsdon, Selsdon and Addington to eventually reach the venue for the Elgin Cup final, Hayes Lane, home of Bromley FC. Here they would face the winners of the City league, Brentwood. The pitch at Bromley is a 4G variety and one of the largest you will find and it was hoped this would suit the Ardingly style of play.

The two sides met in the quarter final of the ISFA cup when, having trailed 0-1 for most of the match, Ardingly scored twice in the last 4 minutes to win. Brentwood would no doubt be seeking revenge and sure enough they started very strongly, dominating the early phases of the game with the Ardingly team seeming rather nervous and tentative in their play. It was soon obvious that the referee was not a fan of any form of contact, especially with any arms and Ardingly conceded a succession of free kicks in dangerous positions. It was after 11 minutes that one of these led to the opening goal for Brentwood as their big centre half lost his marker (no names mentioned!) to head home. This was probably the shock that Ardingly needed as they now relaxed and began to play their own game. A stunning equaliser from Alfie Baldock was soon followed by a flowing move which ended with Timi Esan scoring. By now the game had completely changed and 3 mins from half time a superb pass released Timi again who applied his usual calm finish. As half time approached Ardingly now looked comfortable at 3-1 but with literally the last kick of the half Brentwood scored to change the whole complexion of the game and send the teams to the dressing room with plenty to ponder.

As the teams emerged for the second half it soon became apparent that the goal just before half time had not rattled the Ardingly boys as they continued to play with a calmness and composure which belied their years. Sam West was vocal in goal. Tom Williams and Ryan Trotter were by now in command in defence, very ably supported by Hugh Stanton and Ben Vickers. Jarryd Richardson was afforded more opportunity to display his talents in midfield and Alfie Baldock, buoyed by his goal, worked tirelessly. Will Rodgers was dominating midfield and Timi Esan was a constant threat in attack with the movement of Patrick Ross off the ball creating space to be exploited. All 11 players were doing all that had been asked of them.

On this large pitch it was vital to retain passion and to stretch the opposition, waiting patiently for them to tire. However Brentwood displayed a great deal of character and fought valiantly but as the game progressed more space appeared and with 15 mins to go Timi engineered an opportunity for himself and shot into the bottom corner to make it 4-2. This seemed to knock the stuffing out of the opposition a little and a masterful tactical substitution saw Andrew Bell at 4 ft 10, or thereabouts, put on to play centre forward against a 6 ft tall defender. Within a few minutes he scored the fifth goal showing great anticipation to capitalise on a mistake by the goalkeeper to walk the ball home. Game, set and match, or so it seemed… but wait a moment. With 4 minutes to play Brentwood won a corner and after a frantic goalmouth scramble claimed a goal. The referee and linesman were unsure but decided to award the goal even though neither could be certain it had crossed the line (Sam insists it did not). Sadly VAR was not in use and now, at 5-3, Brentwood had the wind in their sails. Not for long though as in the very next attack Timi completed his hat trick with what can only be described as an outrageous goal, somehow working his way from the touchline into the 18yd box, into the 6yd box and tapping home with bemused defenders all around.

So that was it. Ardingly triumphed 6-3 to win the cup and deservedly so. Every player played their part. Sam was solid in goal. The back four of Hugh, Tom, Ryan and Ben were compact and competent in defence. In midfield Will was dominant and Alfie seemed to run all day. Jarryd worked very hard too and looked a constant danger in possession. Patrick never gave their defenders any peace and Timi was a constant outlet out wide, working back to help the midfield on numerous occasions. The 3 subs of Sandy, Andrew and Reggie all offered great support and the knowledge that they could run on the pitch and perform anywhere. Job done !!

The U15 have enjoyed a fantastic season and surprised many with the progress they have made. Their work rate and team ethic has been a joy to behold and add to this tenacity and undoubted skill and one can see why they have achieved so much success. Mr Nicholls certainly found a way to get the best out of every one of them and established a team full of commitment and belief. It would have been a travesty had they not won something but they did and the Elgin cup once again will be inscribed with the name of Ardingly College. A great night to climax a great season. The future for these players could be very bright. 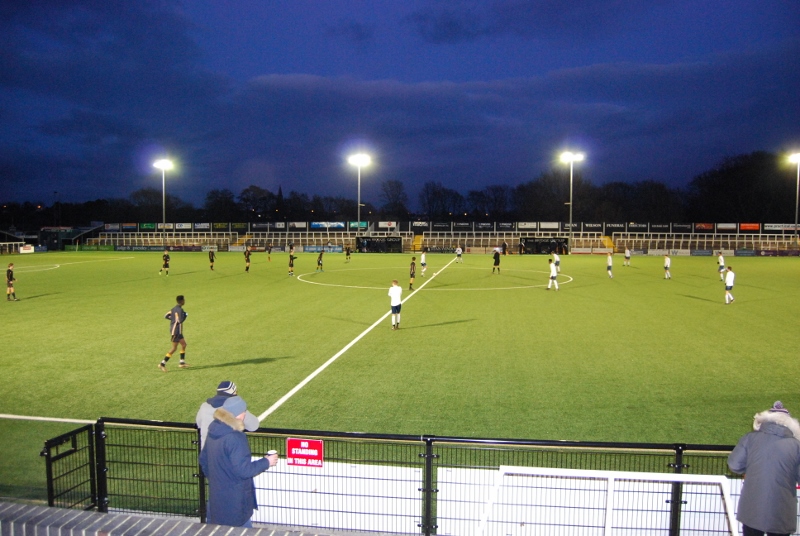