ECONOMICS CONFERENCE WITH THE INSTITUTE OF ECONOMIC AFFAIRS AT ARDINGLY COLLEGE 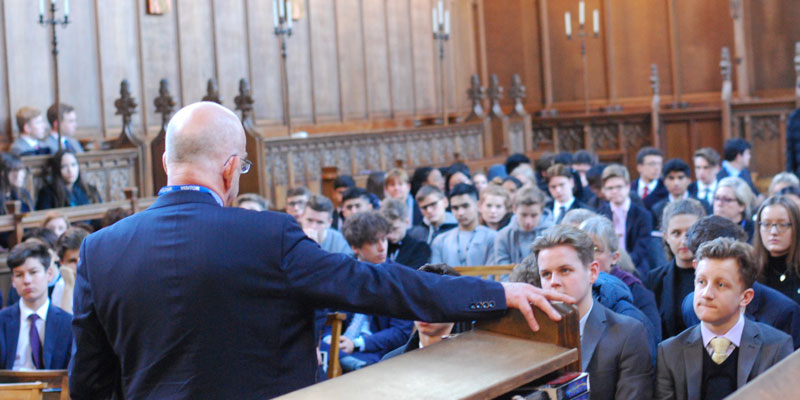 CONFERENCE WITH THE INSTITUTE OF ECONOMIC AFFAIRS AT ARDINGLY COLLEGE

Students enjoy an informative and engaging day of lectures on different aspects of Economics.

The day was organised by our own student-led Economics Society in conjunction with the Institute of Economic Affairs, who provided the speakers.  In addition to our own Economics students we hosted visitors from 9 other schools from both the state and independent sector.  Our first speaker, Dr Steve Davies, explained three different theories as to why business cycles of varying lengths have been experienced historically in the global economy.  His reasons ranged from short term changes to stock levels, medium term “animal spirits” of investors and longer term changes to technology.  Our second speaker, Dr Martin Cox from the John Locke Institute in Oxford, encouraged debate on poverty and inequality, suggesting that the eradication of poverty was more important than the issue of inequality.  His session proved the most controversial and led to much ongoing debate in class and House after the event.  The third session from Professor Len Shackleton was entitled “Robots and Jobs:  See it from an Economist’s Point of View”.  It contained an engaging mix of reflection of historic employment trends (did you know that in 1841 there were 15,000 people employed as saddle makers in the UK and 97,000 blacksmiths?) and current threats to employment (the 3 A’s – automation, AI and algorithms).  Professor Shackleton also led the final session on Careers in Economics, suggesting various careers (and associated earning potential!) linked to an Economics degree.  The day proved a huge success with many Economics students commenting on the relevance to their current studies and the Economics Society intends to make this an annual event.