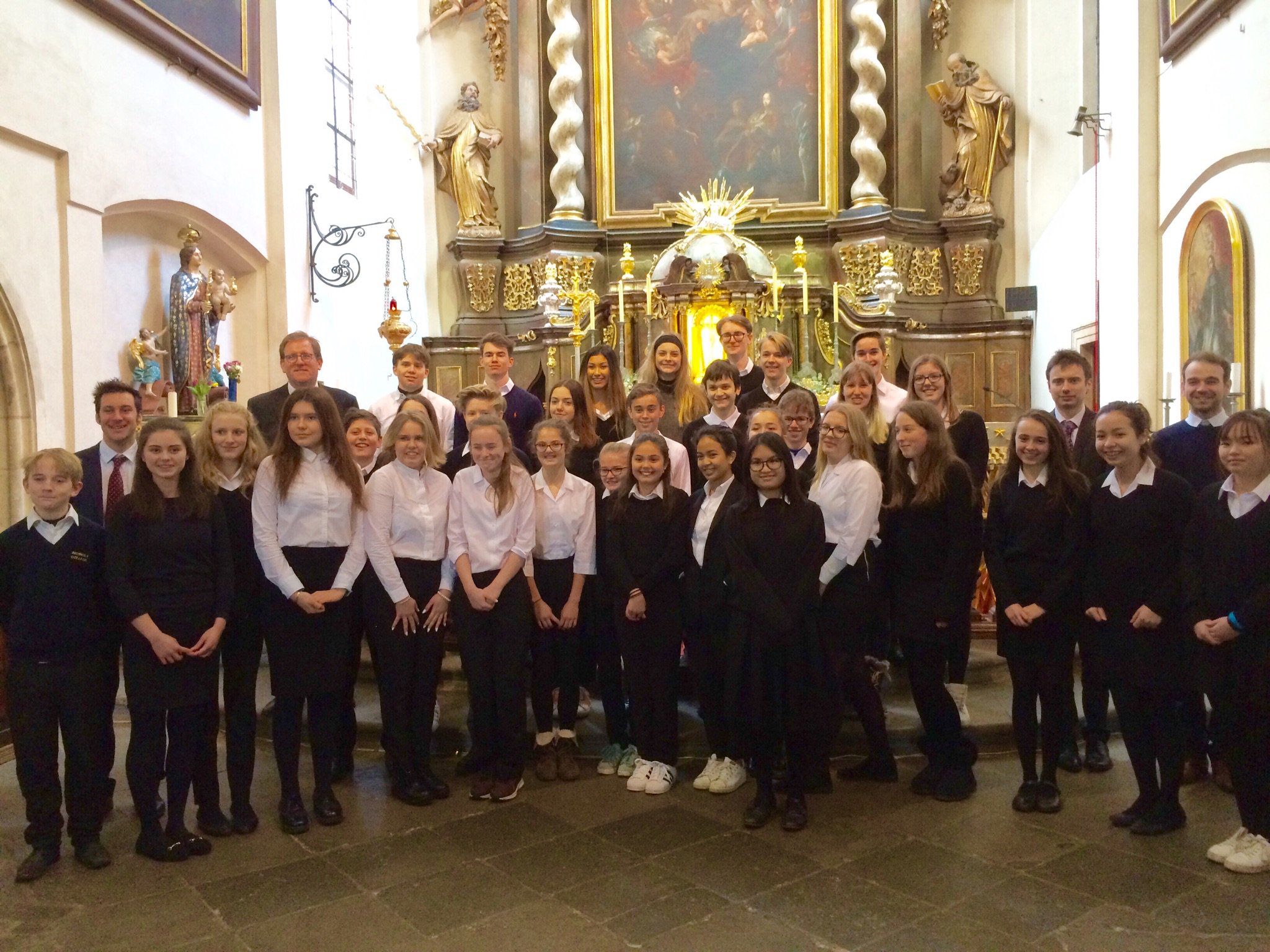 This year 34 members of the College Chapel Choir travelled to the Czech Republic to perform in a variety of churches across Prague. I am not myself a chorister, but I do consider myself an appreciator of music as well as high culture in general; as such this tour was quite a treat. In total the choir performed in four churches: three impressively decorated catholic churches as well as the Anglican Church in Prague, which was equally beautiful. All the more beautiful, however, was the sound produced by the college’s own choir, which did more than enough to distract me from the stunning décor of the venues and the freezing conditions inside of them (it turned out that very few churches in Prague are heated). Pieces ranged from Mendelssohn’s Verleih und Frieden to Durufle’s Ubi Caritas alongside works by Elgar, Rutter and Eccard. All were excellently and professionally sung, as the number of parents who braced the Prague weather to attend the masses can attest. Ardingly’s Mr Thompson, as always, wowed on the organ. During one particular mass I was relieved of my page-turning duties by the church’s resident Czech organist so that he could study Mr Thompson’s technique more closely. I’m sure that he was as impressed with the musical skill of both our organist and choir as I was.

The enjoyment of refined cultural pleasures was not limited to the singing of the choir, however. Over the course of the trip we visited various historical Czech landmarks and museums. Given that most of our travelling was done on foot, allowing us to enjoy the city in all of its everyday majesty, we were all thankful that our snow-boots were not necessary; for those who were already struggling with the walking and sub-zero temperatures, a blizzard may have proven too much. On Saturday, our first full day, aswell as performing at the Lady Victorius church in the afternoon, requiring a walk over the famous Charles bridge, we visited the Communism Museum and the Old Town Square, two fascinating insights into the rich and tumultuous history of the city. Perhaps the most memorable event of the day was the visit to the Estates Theatre to see Donizetti’s Viva La Mamma; a debate is still raging over the degree to which the opera was intentionally farcical or unintentionally so. At the very least none of us could take our eyes off of it. Our day of Czech culture was rounded off with a wonderful Vietnamese meal in the evening before everyone took an early night to prepare for a busy Sunday.

Our second day was the busiest in terms of performances. In the morning the choir sang at St. Clement’s, an Anglican church, after which they very kindly provided for us a fantastic spread for our lunch and a chance to mingle with the local community. Before the evening mass in the Church of the Sacred Heart, an incredibly 1930s building, we managed to fit in a trip to the Heydrich memorial, a sombre reminder of the Nazi occupation. Our evening meal was one of traditional Czech food, which I had never expected to be so delicious. The meal was a particularly celebratory one for myself and Mr Stafford, having enjoyed our team Newcastle triumphing over Manchester United, showing that even on a cultural trip such as this, there was still room for less refined pleasures.

After the final mass at St. Gallen’s church, Monday afternoon and Tuesday morning were filled with even more excursions before our flight home. We visited the overwhelmingly beautiful Cathedral of St. Vitus at Prague Castle (a particular highlight for our resident architect, Ed Draycott), a journey which we undertook carrying a very large cake kindly gifted to us by Mr and Mrs Krasnenkov. The teamwork of the choir was on full display as we each took shifts carrying the Czech delicacy around the city. We also enjoyed a visit to the Czech National Museum of Music, which is home to a staggering collection of obscure musical instruments, as well as, for those who were interested, a visit to the Franz Kafka Museum, a strange and unsettling tribute to Prague’s greatest writer. Although we were sad to see the trip come to an end, with us all having to get back home to revise for our mock exams, for those continuing at Ardingly there is the distant light of the 2019 choir trip to Malta to keep them going through another year without daily visits to churches and museums and historical landmarks. For those of us leaving, we will remember Prague 2018 as one of our finer trips.

Here’s the Chapel Choir on its Prague tour, singing Howells My Eyes for Beauty Pine https://youtu.be/82wCpl6c8MM