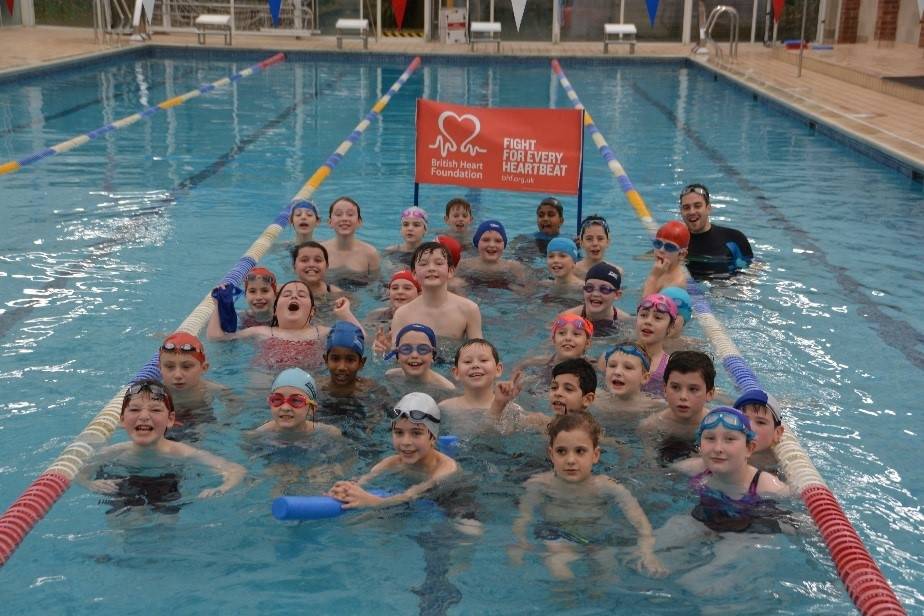 It was daring, brave and maybe even a little fool-hardly but a fantastic success. On Friday 4th December 2015 almost 150 students, staff and friends from Ardingly College took part in the Channel Challenge to raise funds for British Heart Foundation. This involved each person swimming in the school 25m pool with the aim being to cross the English Channel – 21 miles from Dover to Calais or 1,344 lengths of the pool. The target was smashed and those involved swam 125 miles ‘crossing the channel’ almost six times and swimming some 8,000 lengths in the process!
Other local schools also took part throughout the week with 30 swimming from St Peter’s Primary School, Ardingly (pictured) and others from Manor Park Primary School. 200 people took part in the event overall with the youngest being four years of age.
With more money still to come in, the event has already raised in excess of £1700 for British Heart Foundation. The Pool Manager at Ardingly College, one of the main organisers of the event, said: “British Heart Foundation are a fantastic cause and a charity whom I will always be indebted to. I have always been very active, swimming competitively throughout my life. Three years ago I was diagnosed with a heart condition and was rushed to The Royal Brompton where I underwent an emergency triple heart bypass operation. Thanks to the surgeons, NHS and British Heart Foundation I am now back swimming again, coaching and have a much better quality of life than I did before the operation.”

Some statistics of the event: