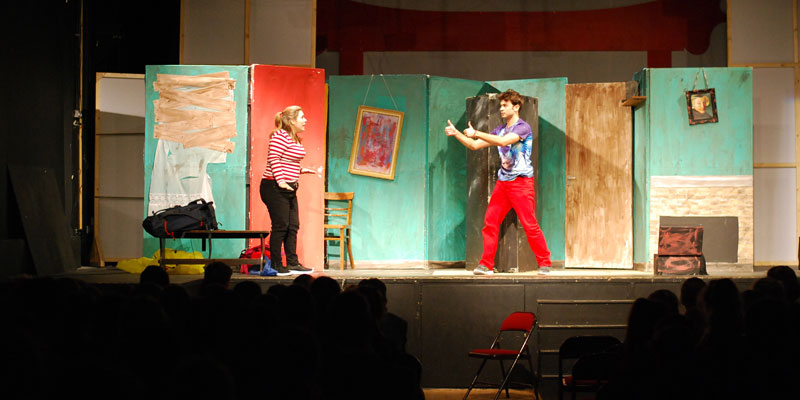 Students from Shell to Upper Sixth enjoyed watching a play, entirely in Spanish, in which they entered the world of two teenagers who shelter in a derelict house from a bad storm.  The play, called La Casa Encantada, involves

Camila and Antonio who are on a hiking trip.  Bad weather forces them to take shelter in an old house (La casa vieja) in the forest.

A policeman arrives and informs them that a dangerous criminal (extremadamente peligroso) has escaped from a local prison and advises them not to leave the house.  Soon strange things start to happen inside the house but Camila and Antonio are trapped and dare not leave.

The play is entirely in Spanish but the students needed to fear not!  The script contained lots of words and phrases which the students had already come across in lessons.  The actors were professional actors who live in Spain but are here for several months touring this play to many schools all over the UK and Ireland.  They spoke very slowly so that the students could understand but as it was a ‘play’ they could watch the action and easily pick out the Spanish words and phrases they knew.

“It was amazing! I thought it was quite clever and quite funny!”

“A lovely end to a Monday afternoon!”

“I actually learned quite a lot.”

“It was very entertaining – I laughed really hard!”

“It was really excellent”.