James, an avid ecologist, has had his article on biological recording published in the Biologist magazine, which is a great achievement. He previously won the Gilbert White Youth Award for terrestrial and freshwater recording and the Bernard Skinner Award for excellence in entomology. James has also been asked to write a quarterly column for the magazine on a similar topic.

James is planning to study Biology at Merton College, Oxford University when he leaves Ardingly College this summer 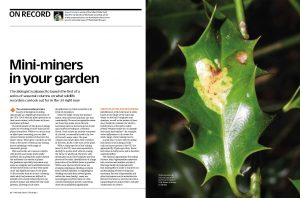