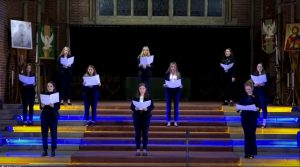 The evening of Monday November 9th saw the first of the College’s two Remembrance commemoration events. As current regulations do not permit large audiences, the College decided to try a new venture to keep the music playing, attempting Ardingly’s first ever hybrid concert – a livestreamed concert, interspersed with pre-recorded excerpts. The pre-recorded musical entries came from ensembles in the Prep and Senior schools, from the Year 3 and 4 choir up to the College’s flagship Schola Cantorum. Between these excerpts were live performances from the Lower Sixth in the Chapel, ranging from recitations of wartime poetry to the upbeat songs of the Andrew Sisters. The performers, live and recorded, did a wonderful job of depicting the tragedies of death and loss alongside the youthful pre-war innocence of proud patriotic soldiers, from both the Allied forces and Germany.

In all, the concert was a complete success, from the smooth running of the technology by the technical events team, to the poignant and evocative performances by the Lower Sixth and other pre-recorded year groups. The Music Department are incredibly proud of everyone involved. If you wish to re-watch the concert, use the link posted below. Our next event will be the Senior School Recitals on Thursday 26th November which we hope to live stream.