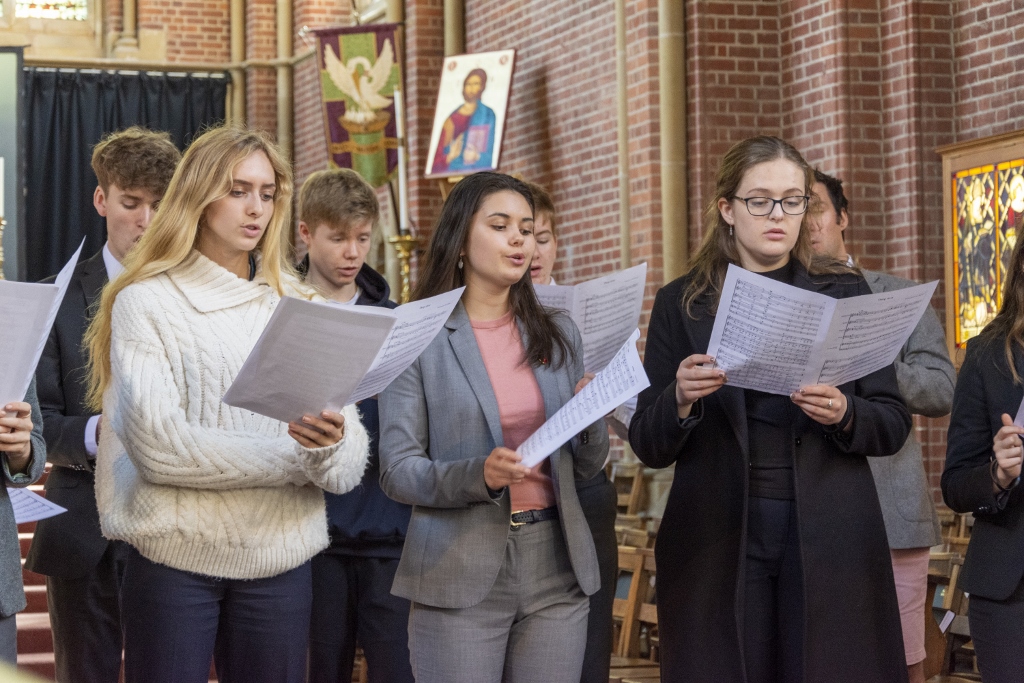 Ardingly College recently was treated to a day of choral workshops lead by the close harmony consort group Apollo 5. They directed choir rehearsals with both Prep and Senior School ensembles; over 100 young singers in all participated in the workshops from ages seven up to 18.

Up first were the years three, four, and five choirs combined, all of whom had been working on the song ‘Roller Ghoster’ in their separate choir rehearsals. Apollo 5 introduced themselves with an upbeat jungle mambo song that immediately captivated the children and had them hanging on every movement later during the physical and vocal warm up. Adding actions and terrified facial expressions to ‘Roller Ghoster’ aided both the children’s performance of the song and their quick memorisation of it.

The Senior School Schola Cantorum followed next, bringing along Ken Burton’s rendition of ‘Deep River’ to work on. Their rehearsal focused in on engaging as a group, leading as an ensemble through breath and body movement. Following them, the Prep School Chapel Choir, who were entranced by Apollo 5’s cover of Simon and Garfunkel’s ‘The 59th Street Bridge Song’ (Feeling Groovy), work-shopped ‘Fauré’s In Paradisum’ (that would also be performed in their Remembrance Service on November 8th).

Finally, the two Prep School choirs, together as the Massed Choir, were taught two songs by ear to demonstrate aural learning: ‘Meguru’, ‘a Namibiam Prayer song’, and ‘Essequibo River’, a Guyanese sea shanty. The two songs challenged the children to listen closely to each other and to combine body percussion with singing in rounds.

The day was concluded with a concert in the chapel, with all four choirs and Apollo 5 themselves showcasing their hard work. Apollo 5’s set included pieces ranging from 17th Century polyphony to modern close harmony. A crowd favourite was their arrangement of ‘Don’t Stop Me Now’, complete with movement and jolly one-liners. Each choir went on to perform their pieces that they had worked on throughout the day with great expression and poise (and in the case of the Massed Choir, lots of clapping and stomping too).

In all, the choral day proved to be a great success, with a request for Apollo 5 to come back as soon as possible. We look forward to working with them again in the near future.