Young Musician of the Year competition

With the obvious complications the pandemic caused to live music making last term, the annual House Music competition was moved to the Trinity Term however this years’ truncated Young Musician of the Year competition did not disappoint! Fresh from the Easter break, there were a plethora of individual performances which took place across the college on Wednesday, 21st April. Organised into a series of year group and sometimes, house, concerts, music could be heard in all parts of the college throughout the day as the Under, Chapel and Recital Room were filled with an array of musical sounds. With performances from pupils in Year 7 through to those in the U6, it was a wonderful day of music making with a total of 194 performances heard! With plenty of house points secured, it was a tough decision to break these performances down into an Intermediate and Advanced finals, two evening concerts which would take place in the coming days. 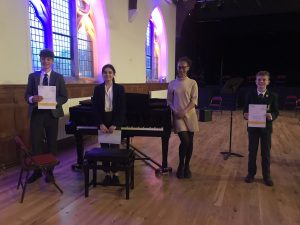 The Intermediate Final took place on Friday, 30th April and it was our delight to welcome Evelina Ndlovu, Director of Music at Handcross Park, to adjudicate this evening of music making. With everything from Jazz on the Double Bass, to movements from Saxophone concertos and Black Sabbath, this was a wonderful evening of live music for all to enjoy. It was an unenviable position to decide a winner however Ms Ndlovu awarded Third place to Olwen (Toynbee, Shell) for her energetic performance of Haybarn Blues on the Viola whilst Monty (Rhodes, Remove) was awarded Runner up with his moving and musical performance of Binge’s Romance for Saxophone. However, with his deeply committed and eye-catching performance of Williams’ ‘Tomorrow’, Harrison (Year 8), a winner of the Prep School competition last year, took the award for the Intermediate Final in 2021.

It was a privilege to welcome the composer, conductor and educator Alexander L’Estrange to the college on Tuesday, 4th May for a series of workshops alongside adjudication of the Young Musician of the Year Advanced Final. Following on from an eclectic Intermediate final the previous Friday, the Advanced Final was a reminder of the beauty of live music, something of course which has been scarce in the previous 12 months. The genuine appreciation and enjoyment every performance brought to both their peers and staff alike was wonderful. With a programme of music which encompassed virtuoso trombone playing, beautifully crafted songs from musicals, piano virtuosity at its best and warm and heartfelt Romantic repertoire, this was an evening of wonderful solo performance. 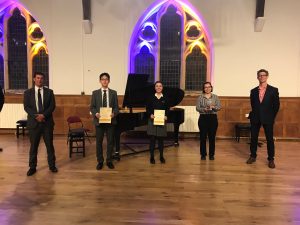 Alexander L’Estrange commented eruditely on all performances before making some tough decisions. For his simply breath-taking performance of Chopin’s ‘Ballade in G Minor’, Kin (Woodard Boys) was awarded a Highly commended whilst Mark (Mertens, Fifth) who opened the programme was awarded Third place for his musical performance which explored the full range of the Horn’s possibilities in Neuling’s ‘Bagatelle’. Emily (Toynbee, Fifth) produced a very moving interpretation of ‘My House’ from Matilda, something which transported us to the West End and this communicative performance won her Second place. However, it was Angie (Woodard Girls) with her performance of Dave Heath’s ‘Out of the Cool’ who was awarded the coveted title, producing a performance of superb control, moments of musical virtuosity but showcasing incredible breath of sound across the full breath of the flute.

Alexander L’Estrange commented: ‘It was a huge pleasure and privilege to adjudicate the Young Musician Final. I was greatly impressed with the overall standard of musicianship and performance across a variety of instruments and voices; it bears testament not only to the fine music department and ethos at Ardingly but also to the students’ dedication and hard work, particularly in these testing times. It was hard to pick just one winner, but Angie showed exceptional skill and engagement with her jazz flute piece, ‘Out of the Cool’. I wish her and all the other musicians huge success and great enjoyment with their music making in the future.’

Special mention must go to all who participated in the competition, performing their pieces with style and aplomb. Of course, it is hoped that we will return to the usual House Music proforma next year but for the moment, what a wonderful few weeks of music making we have had as we try to return to a new ‘normal’ in these challenging times.