A solar collaboration between two West Sussex schools has been recognised at the Tes Schools Awards, one of the biggest nights in the UK education calendar which was held on Friday 13th November.

The Ardingly Ifield Solar Team, born as a collaboration between Ifield Community College and Ardingly College was awarded Science, technology and engineering team of the year, in no small part thanks to their success in a 3000km cross-Australia race on a solar-powered car they built. 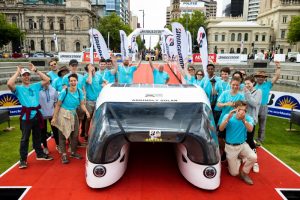 The Ardingly Ifield Solar Team brings pupils from both schools together with 33 companies and three universities, Warwick, Brighton, and Surrey to design, build and run solar-powered electric cars, with names like The Roadster and Basking Beasty.

The team competed in the Bridgestone World Solar Challenge in Australia in 2015, driving their solar car from Darwin to Adelaide. The project aims to increase awareness of sustainable transport and is made up of equal numbers of boys and girls from both schools. They have led solar energy events with primary schools, presented to businesses and shown off their work at national and international events. The project gives students access to experiences and skills that will empower them in any career, not just in the Stem subjects (science, technology, engineering, and maths).

“I have been a member of the Ardingly team for the past three years actually building the car and working with carbon fibre. Then whilst still 16 I was a passenger in the basking beastie, crossing Australia, keeping my driver awake, alert and hydrated in the scorching temperatures. It was great fun.” says Zsofia Heal, Upper Sixth Ardingly College

“The Tes Schools Awards are the Oscars of education, recognising and celebrating everything that’s great about our schools and school staff.

About the Tes Schools Awards

The Tes Schools Awards, now in its 12th year, celebrates the extraordinary commitment, quality and innovation shown by teachers and support staff across the UK.

This year the Tes Schools Awards received over 520 entries from schools all over the UK.